Tata Sky is one of India’s largest DTH (Direct to Home) providers.

It has over 16 million subscribers.

It is obvious that with such a large subscriber base, Tata Sky has to face a large number of complaints and grievances from its subscribers.

As any responsible customer oriented organization, Tata Sky has also set up dedicated help lines and customer care department to resolve the problems, complaints and grievances of subscribers.

Tata Sky has an efficient and competent customer care centre.

They ensure that the numerous complaints filed by subscribers relating to issues such as the non-receipt of TV channels, over billing, poor signal quality etc are resolved speedily.

If the procedure given with regard to Tata Sky Complaints followed, it is certain that the problems can be resolved successfully and promptly by the customer care department of Tata Sky.

Tata Sky Complaints are filed regarding a number of issues such as non-receipt of TV signals, over charging of bills, poor quality of audio or video signals etc.

Subscribers requiring assistance can contact the call centres and request assistance from the customer support staff.

Subscribers can call the 24-hr customer service centre at the numbers given above to register their complaint.

Tata Sky Complaints can also be emailed at help@tatasky.com.

Questions, comments or suggestions are also welcome to be emailed.

Please mention the Tata Sky account in the subject of the mail for quick response from the customer service department to the complaint.

Procedure for redressal of complaints through the call centres

Tata Sky has a well-defined procedure that subscribers should follow.

The subscriber should call the Tata Sky 24×7 helpline to lodge complaint with the call centre.

The executives in the Call Center Customer Care department are trained to answer Subscriber queries in 13 languages.

Tata Sky has assured that at least ninety per cent of complaints relating to non-receipt of all signals (other than those caused by disturbances of weather or natural calamities) by Subscriber, shall be redressed and signals restored within a period of twenty-four hours of the receipt of the complaint.

In case of complaints (other than non receipt of signals) by Subscriber, at least ninety per cent of all such complaints shall be redressed within a period of forty-eight hours of the receipt of complaint.

All other complaints shall be addressed as early as possible.

Under the Direct-to-Home Broadcasting Services (Standards of Quality of Service and Redressal of Grievances) Regulations, 2007 the Telecom Regulatory Authority of India (TRAI) has set certain minimum quality standards to be followed by DTH operators with respect to their services, including redressal of subscriber grievances.

For example, it is mandatory for DTH service providers to give the subscriber a proper, detailed bill showing the tariff towards the subscription package, value-added services (if any) and applicable taxes.

Similarly, every DTH provider has to give a warranty for equipment (including the set-top box) bought by the customer.

During this warranty period, no charges can be imposed by the service provider for any repairs or home visits for such rectification of faults in the equipment.

The regulations also provide for complaint redressal. Every service provider has to have a call centre and also a nodal officer for the purpose. There is also a time limit for resolution of complaints.

The regulations further provide that no complaint shall remain unresolved beyond five days. If it does, the subscriber should be given a proportionate rebate in the subscription from the sixth day of the registration of the complaint till its satisfactory resolution.

This is in addition to any other relief that the subscriber may seek and get under any other law in force.

In Tata Sky Limited vs Kamla Lall (RP No 3044 of 2010, decided on January 14, 2011), the apex consumer court has held that DTH operators who provided deficient service will have to compensate the consumer.

Tata Sky has, in addition to the dedicated call centre network, nominated nodal officers for redressal of grievances of those subscribers who are not satisfied with the redressal at the call centre level.

Such subscribers can contact the nodal officers citing the docket number issued by the call centre.

Procedure and benchmarks for redressal of complaints through the Nodal Officers (if not resolved by the call centre as per the above).

Procedure- Subscriber to approach the Nodal Officer, at the contact details given above if the Subscriber is not satisfied with the redressal of his grievance by the call centre.

Benchmark- The benchmark for redressal of complaints through the Nodal Officers is ten days.

Complaints regarding removal of Sony Channels

Recently, a large number of complaints have been filed against Tata Sky for removing
Sony and India Today channels over pricing issues.

There was a severe backlash from subscribers and multiple complaints have been filed against Tata Sky.

But to add these channels also, subscribers have to give a missed call on a specific number.

Unfortunately, the phone number provided by Tata Sky was continuously busy or not reachable, and the customer care service has crashed.

How file a consumer Complaint against Tata Sky in Consumer Forum

If a customer is not satisfied that his complaint has been satisfactorily addressed even by the nodal authority, he may file a consumer complaint before the Consumer Court or Consumer Forum.

The complaint has to be filed in the district consumer forum of the city. The complaint should contain the following information:

(i) The name, description and address of the complainant.

(ii) The name, description and address of the opposite party or parties, as the case may be as for as they can be ascertained.

(iii) The facts relating to complaint and when and where it arose.

(iv) Documents in support of the facts contained in the complaint.

The complaint should be signed by the complainant or his authorized agent. The Complaint has to be filed within two years from the date on which the cause of action has arisen.

A large number of complaints have been filed against Tata Sky for deficiency in service.

However, Tata Sky has a reputation of speedily resolving all complaints in a time bound manner.

Tata Sky’s CEO, Mr. Harit Nagpal, is highly responsive to customer complaints. He can be reached on twitter at https://twitter.com/haritnagpal 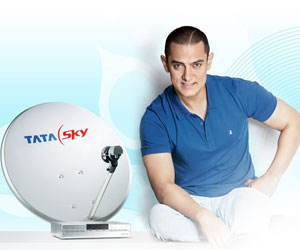 TataSky has the worst customer service.Calling them nonstop for the past 5 days.It's my bedridden grandmothers only source of entertainment!

@TataSky your service is terrible! And response time is just as bad!!

If you are a Tata Sky Subscriber and unable to watch Sony TV call on 18002086633 or email contact@tatasky.com

Seriously contemplating getting rid of @TataSky. Emails, phone calls of no avail. Problem going on for two months now.

Sir,
It's not just @TataSky . Every other dishtv company like @airtelindia or @SunTV or others…. It's the same. Pathetic customer service. They just don't care.

Above all, their customer service people who talk to you and who cone home are extremely rude.

One of the best DTH network in India is not able to provide their Customares with the services of Sony network channels , Don’t know what’s the matter hope to solve it soon , there are also msg from @TataSky to change DTH service provider hope it doesn’t happens #DemandForSony ?

If you are unable to receive these channels on Tatasky then you can give a missed call from your registered mobile number on the above numbers to activate your channels for free pic.twitter.com/003rgDnWj3

@TataSky @TRAI @PMOIndia @rsprasad This Tata sky network is cheating to consumer from this advertisement. When I call to customer support they told it's applicable only for these channels packaged customer.But there is no mention it any advertisement and their TV channel display. pic.twitter.com/ml4ZZjvwFE

Stop the shitty copy/paste replies and get real. When do we expect the channels back or is there a refund policy applicable for customers who have paid for an annual subscription??????

1. Call 18002086633 or
2. Send an email to contact@tatasky.com
3. Or Tweet to @TataSky using #DemandForSony
You can even switch to any other DTH or Cable Service Provider

Don't miss out on the best of nature, science and adventure pic.twitter.com/RBAnFwv9M6

Ok, I'm late to the tweet party, but @TataSky this is utter bullshit. I pay the highest pack price of Rs 800 per month, and this bullshit you do? I think its time Indians should completely abandon #TataSky and switch to other operator. Pathetic service pic.twitter.com/fJGWB8VhKs

Pathetic customer care service.. suddenly most of the channels stopped working. Tried calling customer care. I have been made to wait for 10mins and couldn't even connect #tatasky pic.twitter.com/vLPPv9pKRy

My dear friends at @TataSky … can we know why are we paying you (the highest slab) if you have:
1. Issues with #Sony channels
2. Issues with @IndiaToday channels
3. Issues with Rain Gods
4. Issues with Sun God too#EpicFail pic.twitter.com/OjOfsmCG0M

You guys at @TataSky just keep making false promises… Sharing a SS of the message I received from you one on 1st & 3nf today.. but to either your staff or organization @TataSky don't revert back at all, why? Of you are not competent enough just say so we will switch subscriber. pic.twitter.com/jjGkbI38Pr

@TataSky, Could please help, to figure out how I Can Get The Sony Sports Channels Particularly Sony Six, ESPN, Ten 1, Ten 2 & Ten 3 in my HD Set Top Box & Even after Reapeted Missed Calls To Thsese Numbers Published on @Telegraph Some Messages were Sent To my RMN demanding Cost ? pic.twitter.com/ASU54Du32e

Attn. TATA SKY Subscribers: if any of the SONY NETWORK CHANNELS are missing from your subscription pack, pls. call 18002086633 or Switch to any other DTH or Cable service provider. # Demandforsony pic.twitter.com/c9wXulClSb